What is Proposition 13 in the state of California?

Proposition 13 - What Is It and How Does it Affect My Property Taxes?

Proposition 13 or better known as Prop 13, is a law that dictates how the local assessors arrive at a property value every year. Prop 13 establishes a base year value for property tax assessments and limits the amount a property’s taxable value can rise every year.

What is a Base Year Value?

When it was first passed into law in 1978, Proposition 13 set a “base year value” for every property in the state of California. What they did was roll back values to the 1975-1976 tax year to establish this base year value. Properties that have not been sold or had a change of ownership still have a base year value of 1975.

When a change of ownership occurs, the real property is re-assessed at its current market value at the date of the sale. This transaction establishes a new base year value for the land parcel and the real property or improvements. If only a partial change in ownership occurs during a transaction, only part of the base year value changes that was affected in the sale.

In the case of new construction, this type of property gets re-assessed at current market value after completed. This year completed establishes a base year value.

Business personal property, airplanes, boats and other items are subject to yearly reappraisal during reassessments.

An Example of Two Office Owners 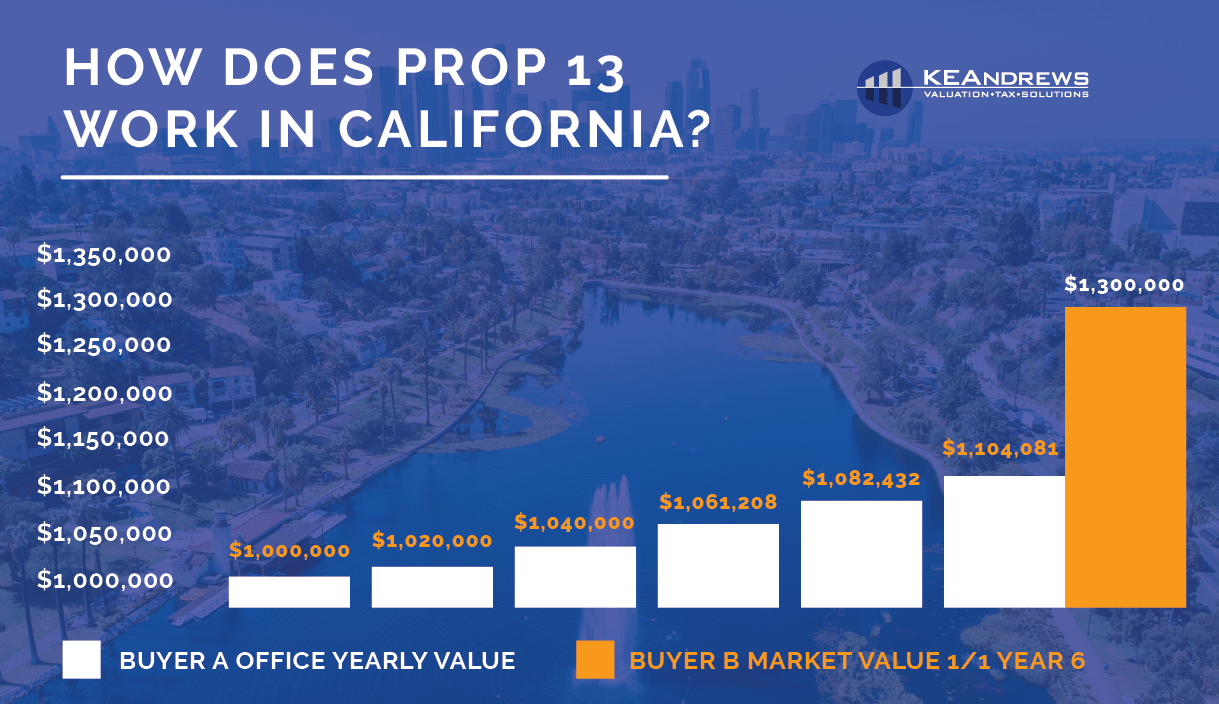 Get in touch with one of our experts

GET IN TOUCH
Read More and Discover

The Latest News From Our Team

Will The Texas ISD M&O Property Tax Rate Be Eliminated

SEE ALL THE POSTS

Our team at KE Andrews provides a centralized place for all relevant news and legislation. Our team also provides thought leadership and insights on topics that are in the news.

The Benefits of Our Property Tax Services

We are not just a compliance firm. We go after every opportunity to return revenue to your bottom line. Our aggressive but fair approach has been a hallmark of our organization since inception.

The customer is at the heart of our business, and your needs are our priority. You will see a marked increase in responsiveness and care to you as a KEA client.

Customer satisfaction is the most important facet of our business, something measured by our responsiveness to clients. We pride ourselves on the structure and team that we’ve built to exceed your expectations on response times and data delivery.

Accruals for some companies can be of equal or greater importance than securing the lowest valuations. The systems we’ve designed around accruals and complex multi-state portfolios are second to none.

Our custom designed software allows for seamless integration with your accounting systems making us more than just a tax firm. We are your tax department down the hall.

Our nationwide footprint of service currently operating in 76% of the counties in the US has allowed us to foster relationships with local assessors that span decades. This translates into better negotiations, and better results.